Initiative Q has been trending on social media for some time now. I got the below message from a friend:

Initiative Q is an attempt by ex-PayPal guys to create a new payment system instead of credit cards that were designed in the 1950s. The system uses its own currency, the Q, and to get people to start using the system once it’s ready they are allocating Qs for free to people that sign up now (the amount drops as more people join – so better to join early). Signing up is free and they only ask for your name and an email address. There’s nothing to lose but if this payment system becomes a world leading payment method your Qs can be worth a lot. If you missed getting bitcoin seven years ago, you wouldn’t want to miss this.

Here is my invite link: https://initiativeq.com/invite/HGKzI31pQ

This link will stop working once I’m out of invites. Let me know after you registered, because I need to verify you on my end.

After reading this, I was curious to know if this was actually real or scam. So, i started making research on this.

Initiative Q is a speculative digital currency created by Israeli entrepreneur and professional poker player Saar Wilf. He started his first payments start-up in 1997, and later founded Fraud Sciences, which redefined the payment security space and was acquired by PayPal in 2008.

Saar Wilf started a viral social media campaign on 1st of August that leads off with this:

Interested in a free $130,000 lottery ticket, which I estimate has a better than 1% chance to win?

To understand how it works, let’s go back to 1997. The Internet is the cool new thing, everyone knows online shopping is going to be huge, but no one knows how people will pay. We need a way to transfer money quickly and securely, and it obviously won’t be credit cards. No one will send their card number online, where anyone can simply reuse this number to buy anything they want!

And so hundreds of companies scrambled to build “the” Internet’s payment system, including me and my first startup. There were amazing ideas and technologies being developed, but they all failed. The problem – no buyer would use a payment method that sellers don’t yet accept, and no seller will accept a payment option that no buyer uses.

All the innovations were dumped, and the ridiculous solution won: We give a seller a few unencrypted numbers, and they order our bank how much to charge us. It won only because it didn’t require anyone to adopt a new technology.

I learned my lesson and in my following startup, Fraud Sciences, we avoided the critical mass problem by developing technologies that sellers can use on their own to detect that the card number belongs to someone else. That was much more successful, eventually being acquired by PayPal.

Still, the problem kept bothering me. If there was a way to convince buyers and sellers to adopt new technologies before others have, then the payment world could leap decades forward.

A few months ago, while studying the cryptocurrency hype, something clicked.

In economics, it’s known that the value of a currency is proportional to how much people use it. A currency that supports large volumes of economic activity may be worth trillions of dollars. It’s called the “Equation of Exchange”.

So if you were to build the modern payment system that everyone needed, and that system had its own proprietary currency, and you somehow overcame the critical mass problem, then that currency would become very valuable.

And that offers an interesting solution – distribute the currency as incentives for people to become early adopters. The earlier they come the more they receive. Sort of a self-fulfilling prophecy – people join for the potential reward, thus enabling deployment of advanced payment technologies, causing the payment network to grow, the currency to become valuable, and the rewards to become real.

A few weeks ago we informally launched this concept as Initiative Q. We sent invites to a few friends, and we now have several thousands joining every day.

Users joining now reserve a reward estimated to be worth $130,000 if Q becomes a leading currency. To join you must be invited by an existing member. If you don’t know one, send me a private message and I will invite you.

The above message wasn’t quite convincing, so the big question still remain:

Is Initiative Q a Scam

I went further to one of the most popular question and answer website called Quora to the see views of users. Below are some of their comments about Initiative Q:

It isn’t a blockchain or a cryptocurrency, it will just be like any other centralized online payment system like Venmo and Paypal

Venmo and paypal aren’t bad, but they aren’t great either and they are as centralized as can get. You can get your funds frozen by paypal, hacked, the government can shut it down etc. etc.

The same applies to InitiativeQ, everything that happens with it or with your funds is decided by their CEO.

InitiativeQ isn’t a scam 100%, but it’s quite scammy, because it claims that it will become one currency when already many, many other centralized online payment systems or currencies exist. Best case it could become like Paypal or Venmo, but they haven’t even built anything and building reliable fraud detection systems takes years.

It will become a true scam once it launches and starts taking and managing people’s money, becuase a centralized currency cannot become the one and only true currency, because

No, I dont think its a scam. Its genuine effort, which may succeed or fail.

Initiative Q is the brainchild of Saar Wilf, a serial entrepreneur who started his first payments start-up in 1997, and later founded Fraud Sciences, which redefined the payment security space and was acquired by PayPal in 2008.

To incentive this, they are giving away a certain amount to early adopters for free. The idea is that if enough of people have this currency, then it can be used as a legitimate system of exchange. The projected value of a Q is $1. You can get 100,000 Q if you invite 5 more people.

For me the jury is out, it may be a scam or it maybe a genuine effort to get a jump on the future of payment transactions and blockchain technology. At this point they are only asking for an email address and name, so I have not given them anything other than that which can easily be discovered about me. If they start asking for money or personal details such as my social, or bank details then I’ll start being more skeptical. If there blurb is to be believed they are attempting to get their system up to critical mass before they deploy the technology and are offering quite a generous financial incentive for early adopters, but they are only initially allowing five referrals per person. They say the reason is that they want to build trust. Of course it could also be a way of netting in email addresses of those who are likely to fall for get rich quick schemes.

For more views on whether Initiative Q is a Scam or not, click here.

After clicking on the invitation link you will be presented with this page. Click on the “Reserve my spot” button to sign up. 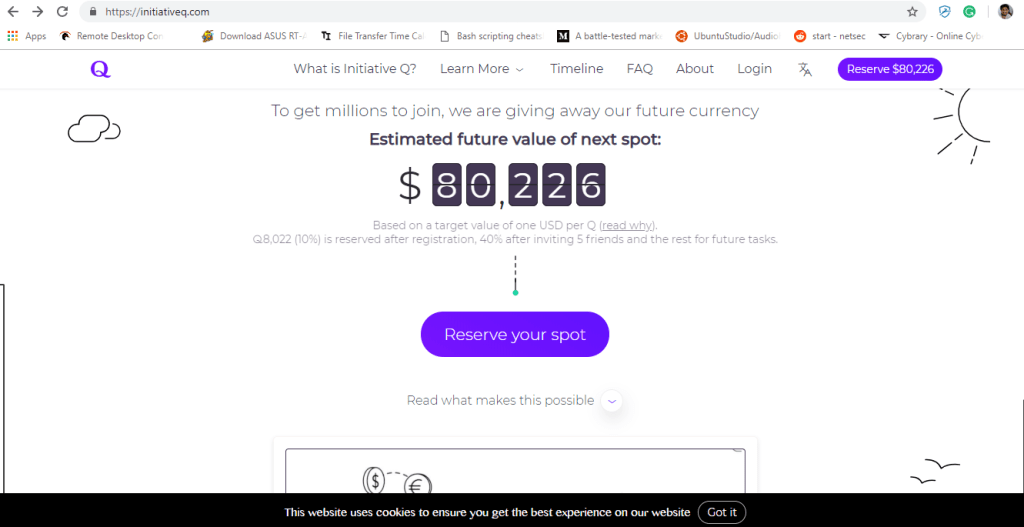 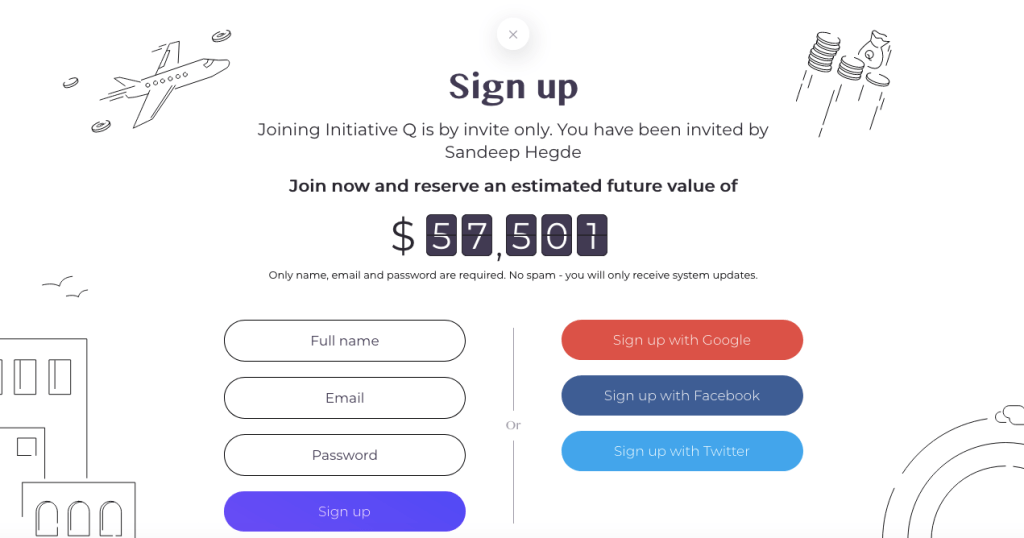 A pop-up requesting confirmation that you are 18 years old and accept the terms and conditions of InitiativeQ will appear. Simply click Approve.

Once you login, you will requested to invite 5 more people to secure the entire Q balance available as an early adopter. Send the emails to your friends and verify their accounts after they join. This ensures that only real people, and not bots, joins Initiative Q.

Initiative Q has not been setup yet. The only condition is that you sign up with your email ID and name. In my view, this not too much to ask.

So get started immediately!